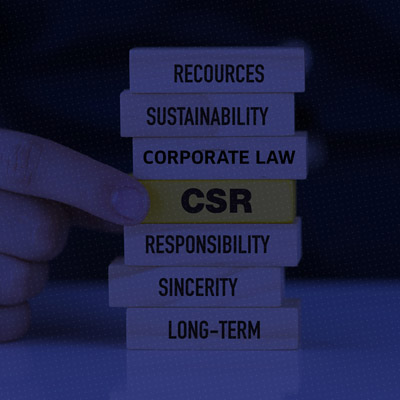 One of the revolutionary introduction, rather significant addition, to the Companies Act, 2013 (‘Act’) is the obligation to contribute towards social causes of the society, popularly or legally termed as ‘Corporate Social Responsibility’ or ‘CSR’ and rightfully it has undergone amendments on multiple occasions.

Curiously, there was no penal consequence that was spelt out clearly for non-compliance of Section 135 of the Act, which includes not spending the prescribed amounts. There were certain important changes that were made to Section 135 through the Amendment Act, which are worth their discussion, inter alia, introducing penalty for non-compliance. While most of the sections of the Amendment Act, have been notified w.e.f. 21 December 2020, Section 27 dealing with CSR changes is yet to be notified, may be for making alignment to the Companies (CSR Policy) Rules, 2014.

Amendment Act, 2020 and its implications:

The Companies to whom Section 135 applies are supposed to make disclosure in the Annual Reports about their amounts spent during the financial year. If there is any deficit in a given year, it must be carried forward to the next financial year, for its spending. However, there was no corresponding provision enabling carry forward of excess spent to the succeeding financial year. The new provision encourages corporates to spend more in a financial year, like for instance in the pandemic financial year 2019-20, a company would have spent more on health care or contributed towards PM-CARES Fund, which will in a way substitute the government spending and at the same time giving allowance for its carry forward, a win-win approach.

So far, for any non-compliance of the provisions of Section 135, corporates have been making disclosure in the Director’s Report. Now, through the Amendment Act, sub-section (7) has been amended as per which a non-compliant entity shall be liable to pay a penalty of twice the amount required to be transferred to the Fund specified in Schedule VII (List of CSR Activities) (‘CSR Fund’) or to the Unspent CSR Account (or) Rs. 1 Crore, whichever is less. Further, every officer who is in default shall be liable to a penalty of 1/10th of the amount required to be transferred as above, or Rs. 2 lakhs, whichever is less.

It may be noted that the base amount on which penalty is calculated refers to the unspent CSR amount.

The Code on Social Security, 2020 that was introduced as part of the labour reforms is aimed at extending social security coverage to the workforce engaged in both organized and unorganized sectors of the country. The Code has specific provision for utilization of CSR Fund for funding certain social security schemes under viz., contribution to the Employee State Insurance Corporation, social welfare schemes for unorganized, gig and platform workers, etc. Bringing the CSR Funds back in to the system for creating necessary eco-system would benefit corporates at large and goes a long way in developing a sense of responsibility for corporates.

The Amendment Act has introduced a new sub-section (9) and brought in a threshold for constituting a CSR Committee. If the amount of CSR does not exceed INR 50 lakhs, the constitution of CSR Committee would not be applicable, and the functions of such Committee would be discharged by the Board itself.

The amount of CSR is calculated @ 2% on the average net profits made during the three immediately preceding financial years. Arithmetically, the requirement of constitution of CSR Committee would be applicable when a company had an average net profit of INR 25 Crores. On a compliance note, this would ease the requirement for companies from having multiple board committees.

Gradually, there is an increased recognition to the companies contributing towards social obligations/ causes, particularly in view of COVID-19 and constitution of PM-CARES Fund. One should not look at spending towards CSR as an alternative to the Government funding, but only consider it as a complementary. The changes brought through the Amendment Act are definitely a measurable step in creating right framework.

[The author is a Joint Partner, in the Corporate and M&A practice at Lakshmikumaran & Sridharan Attorneys, Hyderabad]